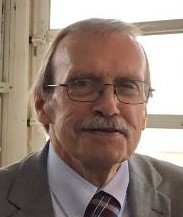 Known by all as “Bob”, he was a graduate of St. Benedict’s Preparatory High School, Newark, and St. Bernard’s College, Alabama.

He spent his professional career serving others in the areas of social work, municipal government and cemetery management.  In his early years, he was appointed Director of Welfare for the Townships of Maplewood, Millburn, Orange, West Orange and Roseland.  While in that position, he also served as president of the Essex County Welfare Directors Association.  He moved to municipal government in 1983 and served as Township Clerk of Maplewood and as the president of the Essex County Municipal Clerks Association for five years.

Bob changed careers in 1988 and dedicated the past 32 years of his life as the General Manager of Rosedale Cemetery, Orange, a position he held until his recent retirement.  During his tenure at Rosedale, he oversaw the complete technical modernization and expansion of the cemetery and its services. He was regarded as a true visionary by the New Jersey cemetery industry.  He was a prominent member of both the New Jersey Cemetery Association and the International Cemetery, Crematory and Funeral Director Associations.

Bob was loved and admired by funeral directors, members of the cemetery industry and by the families that he served.  He will be remembered for his compassion for families in times of sorrow and for his steadfast dedication to Rosedale Cemetery and its surrounding communities.

His life was dedicated to his family and friends.  Nothing made him happier than spending time with his family, including his two dogs, Teddy and Lucas.

He is survived by Barbara (nee Barone), his wife of 46 years, his children Tracy J. and Robert F., family members Thomas and Candace McNeece, his niece Amy McNeece Mitchell (Ryan), and several cousins, nieces and nephews.  He was pre-deceased by his parents and his sisters, Ann Marie Wright and Margaret Rall.

The Family will receive visitors at The Dangler Funeral Home of West Orange, 340 Main Street in West Orange on Thursday, February 27, 2020, from 4 to 8 PM. A Mass of Christian Burial will be celebrated on Friday, February 28, 2020, at 10:00 AM at Our Lady of Lourdes Church, 1 Eagle Rock Ave., in West Orange followed by private cremation services at Rosedale. In lieu of flowers donations are requested in Bob’s name to: MPNresearchfoundation.org or Leukemia & Lymphoma Society (www.donate.lls.org).