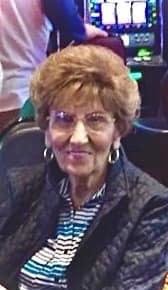 Visiting will be held on Thursday, March 19, 2020 from 9:00 Am to 12:00 PM at The Dangler Funeral Home of West Orange, 340 Main Street in West Orange. Then to St. Rose of Lima Church, 312 Ridgedale Ave. in East Hanover for the Funeral Mass at 12:30 PM. Interment will follow at Gate of Heaven Cemetery in East Hanover. Letters of condolence may be posted at danglerfuneralhome.com. In lieu of flowers, donations may be made in Terry’s name to: St. Jude Children’s  Research Hospital, 501 St Jude Pl., Memphis, TN 38105-9959

Keeping the current health situation in mind, the family understands if you don’t feel comfortable with attending either the wake or the funeral. They will also be having a gathering of family and friends at a later date to celebrate Terry’s life.

Terry was born and raised in Newark before moving to Madison in 1979. She dedicated her life to raising and enjoying her loving family. Terry was a member of the Catholic Daughters of Sacred Heart in Newark.

Terry was the beloved wife of the late Anthony “Tony Brooklyn” Russo. Devoted mother of Jacqueline Sloane and her husband, the late John Sloane, Nancy Byron and her husband Timothy.  Loving sister of Mary Tassiello (the late Dominic), the late Carmella Capone (the late Carmen), and she was also predeceased by brother, Michael Agnellini. Cherished grandmother of Casey, and Timothy Jr. Loving aunt of Cheryl and Vic Graziano.

Share Your Memory of
Theresa
Upload Your Memory View All Memories
Be the first to upload a memory!
Share A Memory